There’s something about embracing the present that is both simple and freeing and yet also elusively difficult for most humans.

I wrote several days ago about the beauty of acknowledging that we need each other. And how asking for help leads to rich community, makes room for sacrificial love to be practiced and results in joy and gratitude… for both the servant and the served.

But what about when you need help and want to ask but don’t know who? Or your who is not available? Because the reality is, people do want to help but sometimes we don’t know who to ask or they just can’t.

Thursday morning, after feeling so thankful for this rich community I talked about, my own lack of foresight left me at home with my 1st grader with no way to get him to school. The few neighbors I know had already gone to work; the moms I often depend on were willing but on their own drop off circuits or too far to ask to come… I was stuck.

And I was momentarily faced with two options: get frustrated, keep frantically calling and texting while neglecting your 2 and 7 year old, beat yourself up and let your bitter attitude intoxicate your home….

As I picked my head up from my phone, I observed my oldest and my youngest giggling uncontrollably. Tucker was teaching Wes a new game; they were spinning and getting dizzy and playing tag all in one and then went on to attempt charades. It was hilarious. I knew I had a friend coming over a few hours later who could drop Tuck off on her way out, decided quickly it was going to be a “home day”, and cozied into my couch with my cup of tea, laughing, delighting in the scene unfolding in front of me.  Tuck had had a hard day the day before, crumbling into tears at numerous points over simple decisions and bedtime, as if he had never made a choice or gone to sleep before.  And as I settled into what the day had served me, I recognized quickly that some rare play time with the littlest of the bunch, who ADORES his “Tutter” along with a little extra attention from mom, was just what this high strung, control oriented, sensitive little leader needed.

It was a lazy, great sort of morning. My friend came and we chatted as the boys played with play-doh, and she dropped Tuck off just in time for recess and lunch and music and we hit the Ram for a midday burger. And I could have still been bitter! Burgers are so much better sans bitter.

I think it would serve me well to open my hands more often, and not teeth clenched, ears steaming justsurvive a change of plan or unmet expectation, but actually roll with it to the point of embracing it; I want to find JOY in new-found, unexpected, sometimes not ideal circumstances.  There was some truth in that old adage from elementary school… Stop, Drop and Roll. Stop freaking out, drop your expectations, and roll with it. 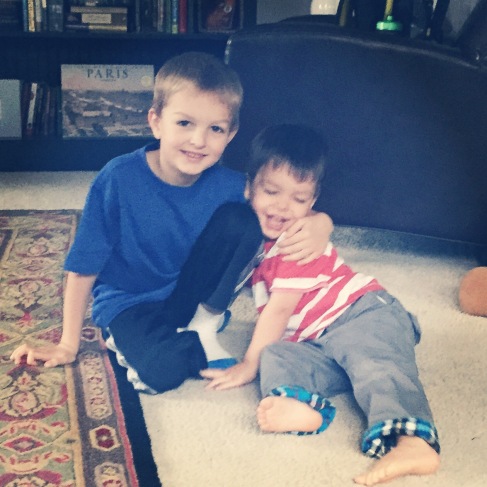