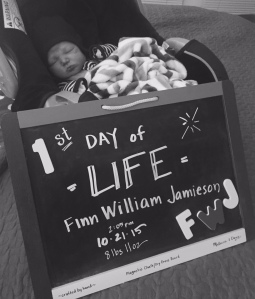 Amazing how all of life can change in one day.

Just two weeks ago Tuesday, Marshall and I dropped our three boys with my parents in anticipation of our baby boy arriving the next morning. We went out for sushi and talked about all the ways life has shifted and changed since our last wee man blessed {more like crashed into} the world with his presence 3 years ago, and how little idea we had of what the next season would hold.  We had no clue just how true that would be of the next 24 hours.

On Wednesday, October 21st at 9am, we headed into the hospital to be induced. Just before we left, I grabbed our copy of Jesus Calling to see what encouragement God had for us on this day of our 4th son’s birth. I read this aloud to Marshall:

TO LIVE in My Presence consistently, you must expose and expel your rebellious tendencies. When something interferes with your plans or desires, you tend to resent the interference. Try to become aware of each resentment, however petty it may seem. Don’t push those unpleasant feelings down; instead, let them come to the surface where you can deal with them. Ask My Spirit to increase your awareness of resentful feelings. Bring them boldly into the Light of My Presence, so that I can free you from them. The ultimate solution to rebellious tendencies is submission to My authority over you. Intellectually you rejoice in My sovereignty, without which the world would be a terrifying place. But when My sovereign will encroaches on your little domain of control, you often react with telltale resentment.

The best response to losses or thwarted hopes is praise: The Lord gives and the Lord takes away. Blessed be the name of the Lord.Remember that all good things—your possessions, your family and friends, your health and abilities, your time—are gifts from Me. Instead of feeling entitled to all these blessings, respond to them with gratitude. Be prepared to let go of anything I take from you, but never let go of My hand!

Huh. It wasn’t the warm and fuzzy encouragement I was looking for, and I had this little twinge in my spirit that I needed to pay attention, that God was perhaps preparing me for something, but quickly pushed the odd feelings aside and skipped out the door, excited to finally meet our fourth child and welcome back my ankles.

After checking in and getting settled into our birthing suite {seriously, Swedish does not mess around; we could have vacationed in that room}, my midwife broke my water at 11am, and at 2:05pm with 3 pushes, Finn William came flying into the world. He was 8lbs11oz and 21in long, my biggest baby yet.

He came out blue, but crying and strong. Odd, as our first child, Tucker, came out blue and silent, as his cord was wrapped around his neck. He had been whisked across the room to NICU where they revived him and cleaned him up before laying him on my chest.  This little guy, however, was blue head to toe, visibly bruised on the right side of his face, as he came out fast, but crying and vigorous and otherwise healthy.

As his color began to fade, we could tell that he had unique markings. Over a third of his body was covered in deep red birth marks; his forehead, shading over his eye and speckles on his face, left arm, all down the right side of his back, and the entire right leg were a deeper bluish-red.

When the pediatrician came in after he was born, in a way very matter-of-fact, he informed us that these birthmarks were called “Port Wine Stains” {derived from old wives tales that believed what the mother ingested while pregnant “stained” the baby}. The markings were vascular – essentially the result of a genetic defect that caused an overdeveloped circulatory system – and would likely not fade. At their most extreme they could indicate seizures, developmental delays and sight loss.

With that, the doctor left, and Marshall and I looked at each other and down at our sweet boy. My heart was uneasy, but not fearful, and I just said, “wow, that was not awesome.” I am an optimist of sorts, and never put myself in “extreme” categories, so I tucked the information away, not really letting the weight of what he had just presented sink in. After all, little Finn was alert, already nursing and otherwise acting in every way like my previous healthy newborn boys.

I did see though, that my baby looked different. I was exhausted, had just given birth, and was filled with feelings of relief, and hope and adoration {and the overwhelming sense that I was thrilled I would never have to be pregnant and go through labor again!}. And so as we took in his little colorful body, I began to wrap my mind around the fact that our little guy might be marked for life.  While this could be really hard, I acknowledged that it could be the most incredible gift… if Jesus’ first miracle was turning water to wine, and this little guy was covered with the stuff, then he must be marked for miracles. I spoke it aloud with tears and laughter.

Marsh and I talked about how he would have 3 big brothers who would protect and speak life into their youngest comrade, how he would be that guy in high school that was the “colorful strong one” who had a deep sense of knowing who he was, knew who his friends were, and knew beyond a shadow of a doubt that he was loved.  We talked of how it would bring an awareness to his brothers, a compassion of sorts, for those who looked in any way “different” than the norm. We acknowledged that this confidence would not come without a cost, without some tears and questions and lonely days. But don’t the best stories include these elements? Don’t the greatest leaders, the most inspirational people, have beautiful stories of adversity?

And so when our boys came to meet the newest member of our family later that day, and Tucker, my oldest, my most observant and most detail oriented son, remarked with quiet concern, “Mom, why does his face look dirty?” we got to tell him that Finn is marked with a special story, just like he was at birth, and that each he and his brothers will all have a special story, and this was the beginning of Finn’s. 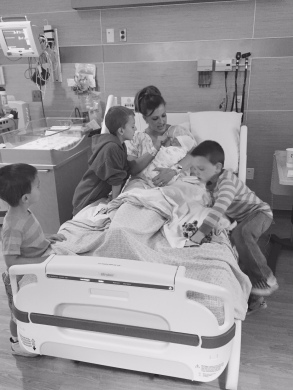 2 thoughts on “Marked for a Purpose”